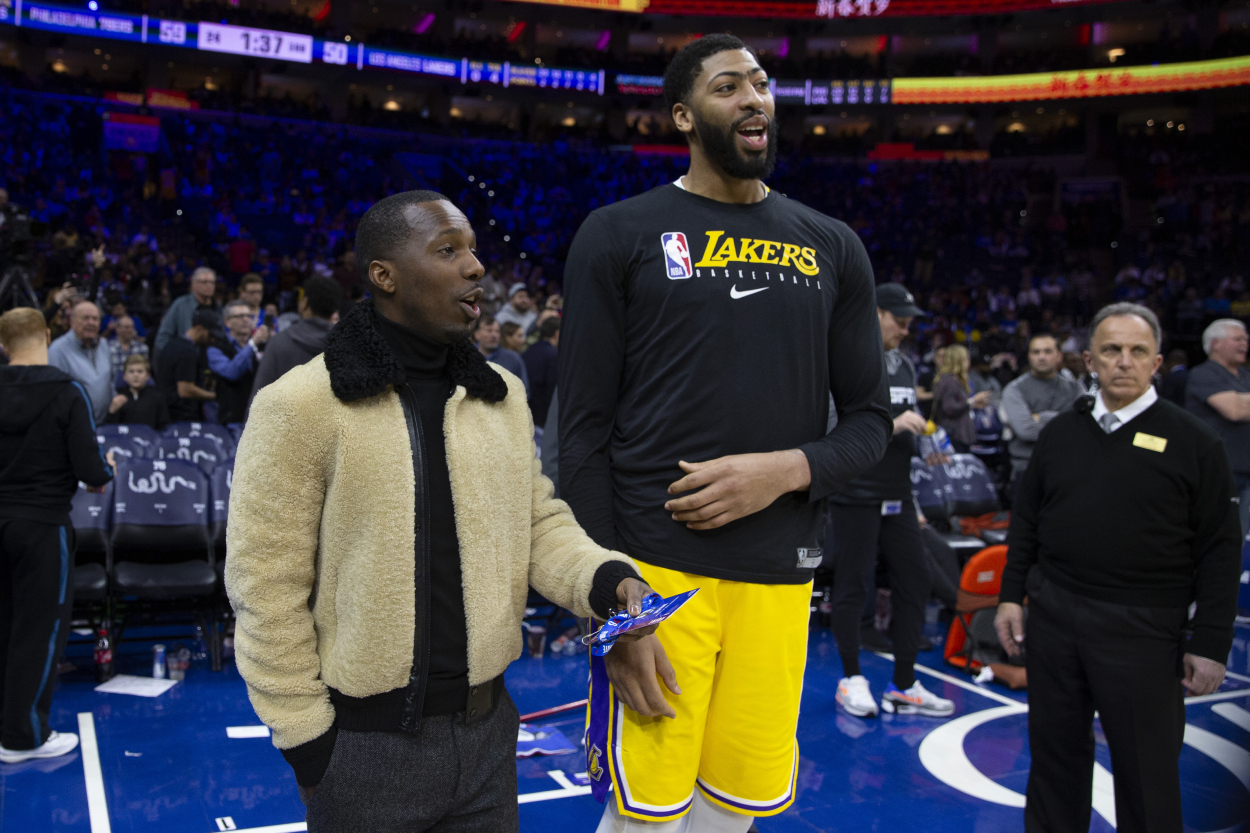 Last season, even with the tragedies throughout the year that included Kobe Bryant’s shocking death and the COVID-19 pandemic, Anthony Davis helped the LA Lakers have a magical season. In his first season in LA, the Lakers claimed the best record in the Western Conference and then ultimately won the NBA championship. This year, though, could be a little more challenging. This is due to the fact that Davis is now hurt, and there is no concrete timetable for his return. Well, Anthony Davis’ agent Rich Paul just reportedly gave an injury update (kind of), and he sent a strong message that could potentially make LA Lakers fans pretty nervous.

Anthony Davis will miss time with the LA Lakers

RELATED: LeBron James Could Soon Have a New Superstar Teammate as the Lakers ‘Would Love To’ Strike a Blockbuster Deal

Just like every other season in his career, Anthony Davis has had a nice year for the LA Lakers. His numbers are slightly down compared to last season, but he has played in fewer minutes per game, and LA has a stronger team this year. Davis is averaging 22.5 points per game, 8.4 rebounds, and 1.8 blocks. He is also shooting 53.3% from the field, which is the third-highest mark of his career.

His play, the play of LeBron James, and the talents of guys like Dennis Schroder and Montrezl Harrell, have helped the Lakers start the year 22-7, which is good for second in the Western Conference.

However, Davis recently suffered a calf strain and has tendinosis in his right Achilles. He will now miss some time for the Lakers. According to ESPN, he is unlikely to return before the league’s March 5–10 All-Star break. Davis will ultimately get reevaluated in two to three weeks.

An Achilles injury is something the Lakers want to be careful with, as that is what forced Kevin Durant out of the 2019 NBA Finals with the Golden State Warriors and caused him to miss the entire 2019-20 season.

So, what is Anthony Davis’ latest injury update in terms of how long he is expected to be out? His agent, Rich Paul, recently had a strong message about his injury.

RELATED: Stephen A. Smith Calls Out LeBron James, Claims He Just ‘Lied to the American Public’

No one really knows when Anthony Davis will return for the Lakers. However, Rich Paul reportedly wants one thing to be clear, according to former NBA player and current ESPN analyst Kendrick Perkins.

“Rich Paul called me this morning, Stephen A., and he told me to make it very, very clear that no one and nobody is going to rush Anthony Davis back, and his health is first,” Perkins said on the Feb. 16 episode of Stephen A. Smith’s show Stephen A’s World. “He even said that if it’s leading up to the first or second week going into the postseason of [AD’s return], then so be it. That’s how long Anthony Davis could be out.”

Perkins did, at least, say that Paul never mentioned anything about Davis maybe missing the rest of the season. He just continued to note how careful Davis and his camp will be, especially after what happened to Kevin Durant two seasons ago.

Still, even if Davis does return, Lakers fans should be pretty nervous by what Rich Paul reportedly told Perkins.

RELATED: How the Not-So-Good News the Lakers Just Got on Anthony Davis Could Actually Benefit LeBron James

Obviously, as long as Anthony Davis is back for the Lakers by the time that the playoffs start, everyone should feel more comfortable. However, if he doesn’t return until right before the postseason, or even once it begins, that is something that Lakers fans should certainly feel nervous about moving forward.

The Lakers could very easily lose in the first round if Davis is not back in the flow of things by the start of the playoffs. Right now, if the season were to end today, the Lakers would play the Denver Nuggets in the first round. While the Nuggets have not been as great this year, they just went to the Western Conference Finals last season. Nikola Jokic could also make things pretty hard on Davis defensively. That would be a pretty tough matchup.

The Lakers may lose some more regular-season games without Davis, too, though, and could potentially fall in the standings. They would then face anyone from the Trail Blazers to the Suns to the Spurs at that point if the standings were to remain close to what they are now. However, even if they were to win against one of those teams in the first round, the Lakers would then potentially have an even more difficult matchup in the conference semifinals than expected.

The LA Lakers are arguably the best team in the NBA. When fully healthy, they have a chance to win the whole thing, too. Without a fully healthy Anthony Davis, though, or with one that is just coming back, the Lakers could be in trouble.