FC Barcelona continues to experience different extra-sports episodes that hit the institution squarely. This time, the Catalan club was at the center of the scene after the Spanish newspaper El Mundo published a document that the Argentine footballer signed in 2017, when Josep María Bartomeu was still the president.

In the article published by the Madrid newspaper, whose title was “Messi’s pharaonic contract that ruins Barça”, The salary that he would receive until the end of his relationship with the culé team was detailed: 555,237,619 euros gross for four seasons in case of meeting all the objectives.

Given this information that traveled the world, the culé entity decided to issue a statement through its social networks to deny “categorically any responsibility in the publication of this document.” 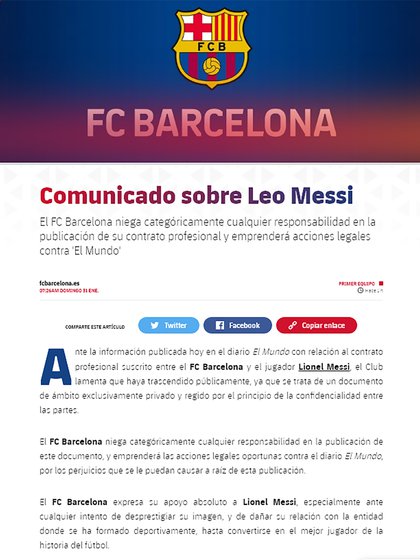 “The FC Barcelona categorically denies any responsibility in the publication of this document, and will take the appropriate legal actions against the newspaper El Mundo, for the damages that may be caused as a result of this publication “, assured the entity culé through an official notification, in addition to announcing that it will take legal action against the Madrid newspaper.

“Given the information published today in the newspaper El Mundo in relation to the professional contract signed between FC Barcelona and the player Lionel Messi, the Club regrets that it has been publicly disclosed, since it is an exclusively private document governed by the principle of confidentiality between the parties ”, said the Barça club.

“FC Barcelona expresses its absolute support for Lionel Messi, especially in the face of any attempt to discredit his image, and to damage his relationship with the entity where he has been sportively trained, until he becomes the best player in the history of football,” he said.

This Sunday, the newspaper ‘El Mundo’ published the contract of the FC Barcelona player, the last one he signed in November 2017 and which is valid until June 30 of this year, with total emoluments of 555,237,619 gross euros to cash in four seasons.