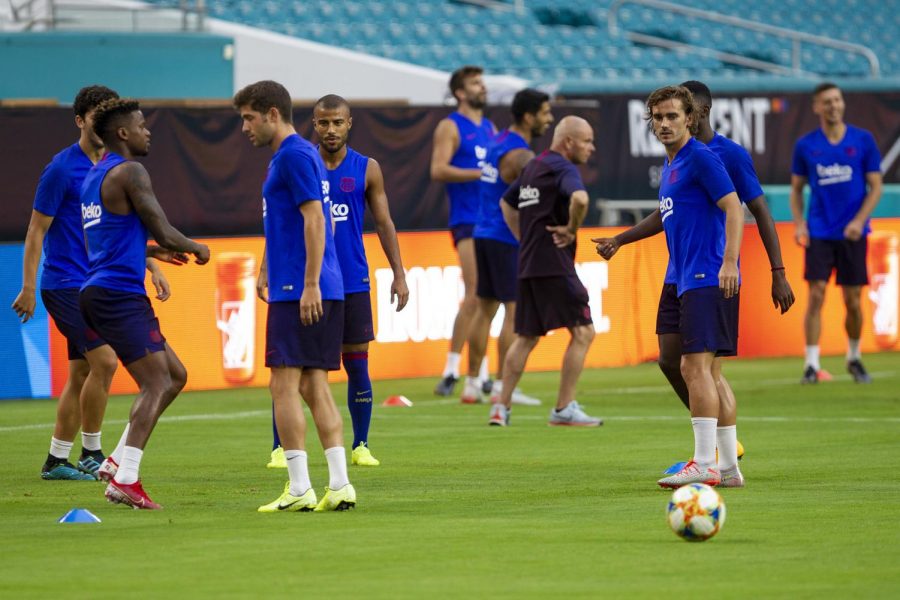 Antoine Griezmann warming up with his teammates before
a pre-season match at Hard Rock Stadium in Miami.

Kylian Mbappe sealed his hat-trick with an expert first-time finish, placed in the far right corner of Barcelona goalkeeper Marc-André ter Stegen’s net, capping a 4-1 victory for Paris Saint-Germain in spectacular fashion. The next day, Erling Haaland surged through the Sevilla defense in a dominant two-goal performance, and the Norwegian striker credited Mbappe’s performance as inspiration for his brilliance.

As Mbappe celebrated his hat-trick by striking a statuesque pose at the corner flag, Lionel Messi trudged back to the center circle, a fitting image for the seeming changing of the guard. While Haaland excelled in Seville, Cristiano Ronaldo and Juventus limped to a 2-1 loss to Porto, with a late goal salvaging any hope of a second-leg comeback.

At 22 and 20 years of age respectively, Mbappe and Haaland represent the future of the global game, but also a departure from the unprecedented two-player dominance of Messi and Ronaldo that has defined the sport over the last decade and a half. Different pathways have brought the two youngsters to the pinnacle of the European game, and both have eyes set on generational dominance.

Since becoming the world’s most expensive teenager in 2017 following a reported $220 million move from Monaco to PSG, Mbappe’s ascent to the top has been meteoric. His breakout occurred at the 2018 World Cup when Mbappe excited and intrigued the global audience with dynamic runs, brilliant footwork and expert finishing for the victorious French side.

In a way, the tournament secured Mbappe’s legacy before it was ever able to be questioned, as he helped France the elusive World Cup trophy that has evaded both Ronaldo and Messi at just 19. But Mbappe was only getting started, as his prolific goalscoring record and continued improvement demonstrate.

Playing alongside Neymar, Mbappe has rampaged through the French league and has recorded an impressive 24 goals and 17 assists in 41 career Champions League appearances.

Despite being the son of former Leeds United and Manchester City defender Alf-Inge Haaland, Haaland’s road to the top was more circuitous, beginning his career with his hometown club of Bryne FK before moving to Molde. Haaland slowly grew into his role, winning Norway’s Breakthrough of the Year award and securing a move to Red Bull Salzburg, the Austrian team owned by the energy drink conglomerate.

In 2019, the mythos began, as Haaland scored nine goals in an under-20 World Cup match against Honduras. So began a torrid streak that has truly not yet ended. Haaland recorded three domestic hattricks in a month, scored in his first five Champions League matches and has delivered a host of memorable quotes, celebrations and his trademark succinct post-match interviews.

Then it was off to Dortmund for Haaland, as the German club fended off interest from other European giants by offering immediate playing time, world-renowned player development, and a promise to let the young Norwegian leave for $91 million should he stay until 2022. This buyout clause, while still a gargantuan sum, is a steep discount on a player of Haaland’s caliber and potential, given a still unproven Mbappe moved for more than double that amount in 2017.

Both Haaland and Mbappe are perennial fodder for transfer rumors to the European giants of Barcelona and Real Madrid, which seems an inevitability for Haaland and a probable outcome for Mbappe. The Qatar-financed PSG, with its seemingly infinitely deep pockets, could secure Mbappe’s services for as long as the French star desires, with the 22-year-old negotiating a contract renewal that will surely offer a hefty raise on his already lucrative $500,000 a week salary, which comes out to more than $25 million a year.

Mbappe and Haaland seem set to dominate headlines and fixtures for years to come, pleasing their Nike sponsors and earning millions for their agents. But the colors and badge for which they craft their legacies remain to be finalized, with the rest of the European game anxiously awaiting the next move of the mercurial youngsters.