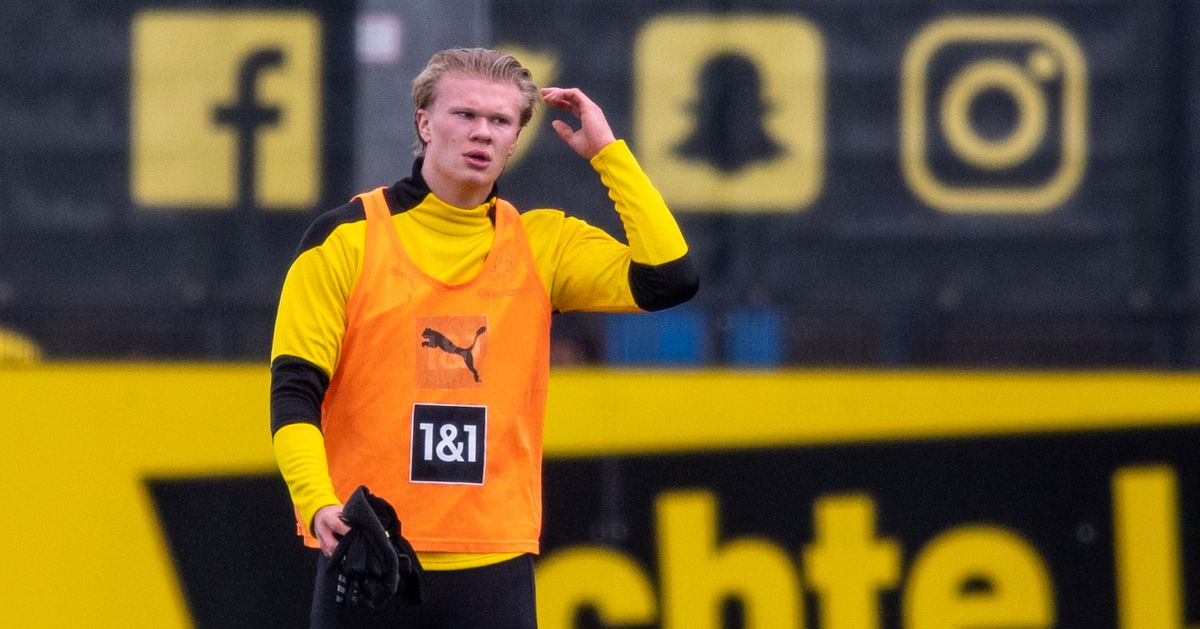 Chelsea has reportedly been scoping Borussia Dortmund star Erling Haaland for quite a while and now it appears that the London-based club is about ready to splurge on the Norwegian phenom:

Chelsea will reportedly splash out on Borussia Dortmund star Erling Haaland in the summer, while looking at a potential deal for Bayern Munich’s David Alaba too. Real Madrid’s interest in the 20-year-old is well established, but Sky Sports reports that Chelsea will try to get ahead of the Spanish giants in the race for his signature.

Madrid remain confident that Haaland will end up in Spain, but Dortmund could be tempted to sell him at the end of the season if Chelsea offer a fee higher than the £66 million release clause that will become active in the summer of 2022. The Blues are one of few clubs capable of forking out such a fee after the coronavirus pandemic took its toll on European football finances.

Given Dortmund’s poor season and this awful financial climate, BVB could be inclined to try and cash out on Haaland if they are confident he will be leaving in 2022 anyway at what looks to be a bargain deal because of his release clause.

As a staunch advocate that Bayern Munich should be all-in on Haaland, Chelsea’s push could price the Bavarians out. With an expected transfer budget of just €60 million to €80 million for this summer, Bayern Munich likely will not be able to compete with Chelsea given how many other roster spots need to be replaced.

The Bavarians can really only hope to bolster their budget by selling off Corentin Tolisso, which likely will not impact the club’s finances enough to add the likes of Haaland, a central midfielder, and a starting-caliber center-back.

It appears that Chelsea is ramping up to spend big for the second consecutive summer as new manager Thomas Tuchel might be leading the charge for David Alaba as well:

According to Fabrizio Romano on The Si Phillips Talks Chelsea Podcast today, “Tuchel is a big fan of Alaba” and Chelsea are “one of the 5 clubs in talks to sign him.” Of course, Alaba looks closest to Real Madrid and Romano actually admits that a deal has been agreed, but nothing has been signed and it has not been completed yet. This has been the case for a while now, which makes you wonder whether another club is pushing hard to intervene. As Romano says, ‘anything can still happen’ with this one.

At this point, it is widely-assumed that Alaba will end up with Real Madrid, but perhaps a huge offer from Chelsea could sway him into a future in England.

One player who probably did not expect to still be with his current club at this stage of the season is Werder Bremen’s Milot Rashica. Unless Die Werderaner receives a really good offer, however, Rashica will likely stay in green and white:

Werder Bremen would let Milot Rashica go until Monday with a suitable offer — but so far there has not been one. Florian Kohfeldt believes Rashica will have a “very good second half”.

The status is the same as in the summer that the highly talented professional should be allowed to leave the club if this can improve the precarious financial situation at Werder. “If the parameters are right, a change from Milot is conceivable,” sporting director Frank Baumann explained again, “if that is not the case or a club reports too late, then he will also play for us for the rest of the second half of the season.” Bayer Leverkusen failed when Rashica signed on the last day of the transfer window in October due to the deadlines.

In any case, Kohfeldt should like the fact that he knows another facet in his squad with the flexible offensive player. The 38-year-old said, hoping to stay, “I am absolutely convinced that he will play a very good second half.” After a thigh injury, which Rashica had put out of action beyond the turn of the year, his physical condition is now “good to very good” again. In the 4-1 win at Hertha BSC, he played 39 minutes after being substituted on and, according to the coach, impressed with both defensive and offensive actions. “He’s definitely a player you can think about 60 to 70 minutes of playing time.”

With full respect for the bald community, I cannot make such decisions, so I reach out to you my bald friends: Would you welcome the likes of Erling Haaland, Cristiano Ronaldo, Lionel Messi, and Son Heung-min?

I can already heard the “Powder” jokes spilling in on Haaland.

Bald community…we need your verdict! (In the comments below).

It appears that Dayot Upamecano is not the only RB Leipzig defender who could exit in the summer. Ibrahima Konate is drawing interest from Liverpool, Manchester United, and Tottenham Hotspur:

We can add Sassuolo to the clubs chasing Borussia Dortmund’s Mahmoud Dahoud:

Playing for Borussia Dortmund since 2017/18, German international deep-lying midfielder Mahmoud Dahoud (25), already tracked by AS Monaco and Olympique de Marseille, has been targeted by Sassuolo as well, according to Corriere dello Sport. Former ‘Gladbach playmaker is currently on a deal with Bundesliga giants until June 2022.