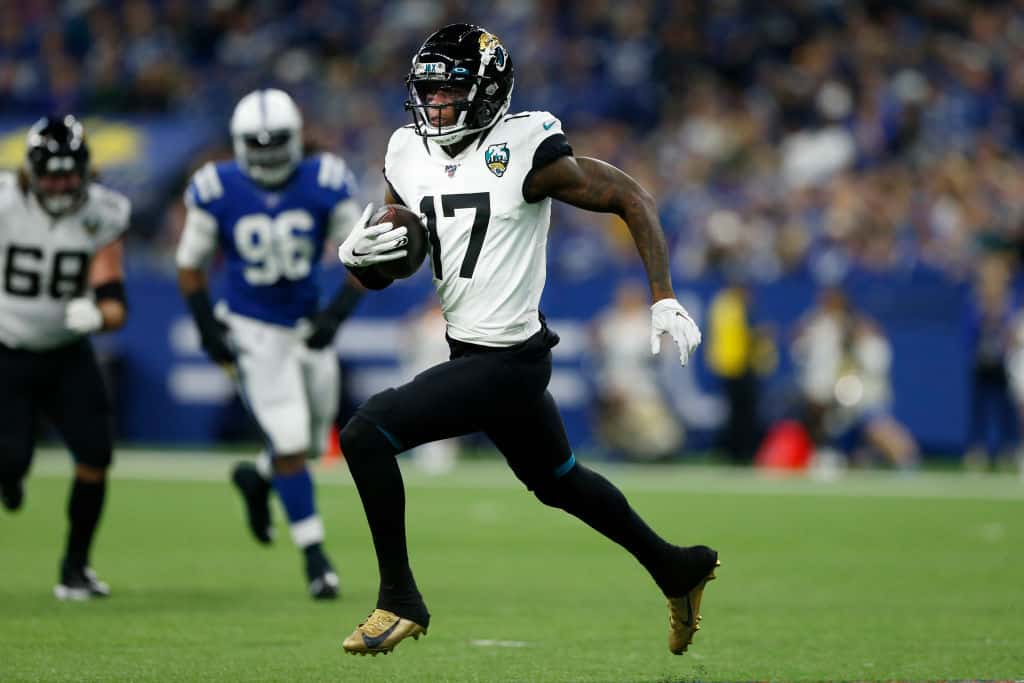 After missing his team’s Week 3 Thursday Night Football defeat to the Miami Dolphins, Jacksonville Jaguars wide receiver DJ Chark is expected to return to fantasy football lineups this weekend. Despite Chark donning a red non-contact jersey all week at practice, Jaguars beat reporter Ashlyn Sullivan reports that the Jaguars are “comfortable” with the wide receiver playing this Sunday.

While it looks like Chark is on pace to return to game action, it remains to be seen what impact the wide receiver can make on the football field. Chark’s offensive numbers have taken a bit of a hit two games into offensive coordinator Jay Gruden’s new system and now the 2019 breakout wide receiver has to battle through a chest injury that could linger all season.

Fantasy Leagues on FleaFlicker
Looking for a fantasy platform that is infinitely customizable yet simple and easy to use? At FleaFlicker, you can join an existing league, begin your own league, or import a league with access to cheat sheets, PFN analysis, and much more. No-nonsense user experience and a caring, committed development and support staff. Click here to get started!

Even though WR33 is a significant increase than his overall WR66 number, Chark still has a ways to go before he matches his 2019 breakout season. Last season, Chark finished with 73 receptions, 1,008 receiving yards, and eight touchdown receptions en route to a WR17 finish.

With a 7-109-1 TD line three games into the season, Chark will need a serious increase in passing volume to reach those numbers again in 2020. Chark would need to average over five receptions, 69 receiving yards, and .5 touchdowns per game over the Jaguars final 13 contests to match his 2019 fantasy football numbers.

How does Chark match up in Week 4 against the Cincinnati Bengals?

Barring a late setback in his recovery, Chark is widely expected to suit up in Jacksonville’s Week 4 contest against the Cincinnati Bengals. If you haven’t kept up with early 2020 trends, that might look like an enticing matchup for Chark to return to, but the Bengals pass defense has been surprisingly effective three games into the 2020 season.

If you drafted Chark as your WR2 in 2020 fantasy football drafts, you’re unlikely to get a great return on that investment. The change in offensive systems in Jacksonville has seen less targets going Chark’s way, and now the wide receiver has a chest injury that could linger all season long.

Even though Chark seems unlikely to match his breakout 2019 numbers, that doesn’t mean you should give up on him and cut bait in fantasy football. Chark is still an extremely talented football player and the number one passing target in Jacksonville. You just have to temper your expectations a bit, as it looks like a WR3 season is more likely than anticipated.

Chark hasn’t shown the upside that we hoped for in 2020, but the wide receiver remains a consistent wide receiver. Chark is currently WR15 in our Fantasy Football Consistency Score above wide receivers Tyreek Hill, Cooper Kupp, and Allen Robinson, among others. The breakout performances may be few and far between for Chark, but he will remain a reliable option week-to-week when healthy.