JEFF POWELL: Diving and cheating in the Premier League, England’s cricketers hitting out at pitches and umpires and even Sir Ben Ainslie has got in the act! What happened to our sense of good sportsmanship?

By Jeff Powell for the Daily Mail

And so the faking and the moaning goes on in this land which used to be the home of good sportsmanship.

Graeme Souness, as straight as a dye on television as he was on the pitch, has called the tumbling and collapsing in Premier League penalty areas for what it is: 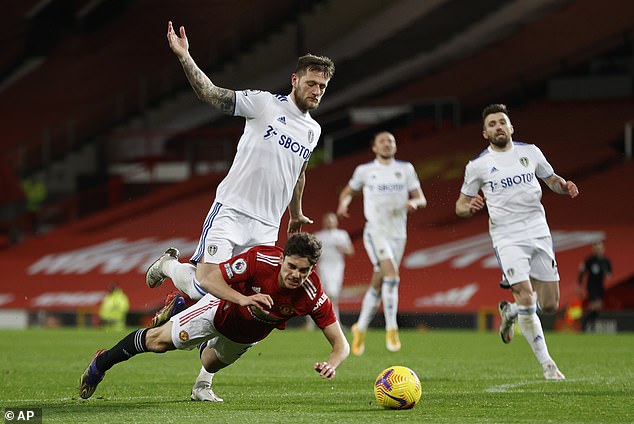 Manchester United’s Dan James was booked for diving against Leeds this season. The faking and the moaning goes on in this land which used to be the home of good sportsmanship

I very much doubt whether any of the players he has condemned for falling down in a strong breeze will pluck up the courage to confront him about an opinion as brutally honest as his tackles used to be, should their paths chance to cross.

Even though he will peeve them, their managers and their clubs all the more with his suggestion that it looks like they are practising these deceptions in training.

You can hear the awkward shuffling of feet in the studios among even his fellow ex-pros turned pundits when he speaks his unvarnished truth. Man up chaps. Get real. For football’s sake.

And what about the cricket? Until Stuart Broad grasped the nettle and put England’s second Test collapses in India down to chronic batting deficiencies against sub-continent spin, too many of his fellow tourists were only too happy to point the finger at the pitch. And never mind that the Indians scored more than 600 runs in their two innings on that allegedly ‘doctored’ wicket.

Then came the unseemly Joe Root and branch allegations of home-town wicket review decisions in the first innings of the third Test, when all those verdicts looked correct to most of us.

Can there be any excuse for then being bowled out for 81 second time around and barely making it to lunch on day two before going down by 10 wickets? They’re still working on that one. 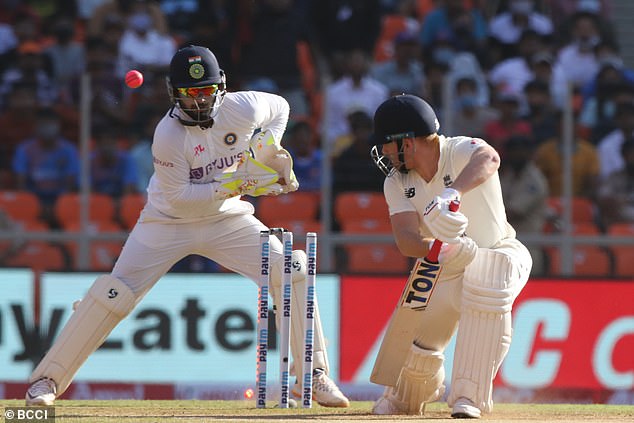 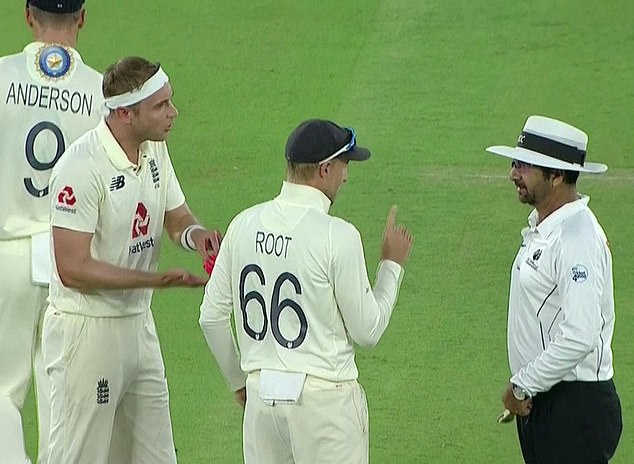 Meanwhile, they should refer to this answer given by a New York City cop to a young lady carrying a violin case who asked him how she could get to Carnegie Hall: ‘Practice.’ In their case in batting against spin.

The blame-shifting has infected even one of our knighted Olympic heroes. Sir Ben Ainslie, golden be-medalled Britannic ruler of the waves, could not resist attributing his boat’s 7-1 sinking in the semi-final of the America’s Cup to Machiavellian chicanery by his opponents.

And what exactly was the treachery committed by the Italians? They had the effrontery to insist upon the last few races taking place on the dates long-scheduled in the calendar.

Wow. Some crime, that. Sticking to the rules.

Ainslie kept arguing for the coup-de-grace to be delayed so that a loosening of Covid restrictions in New Zealand would allow more fans to gather on the shores. 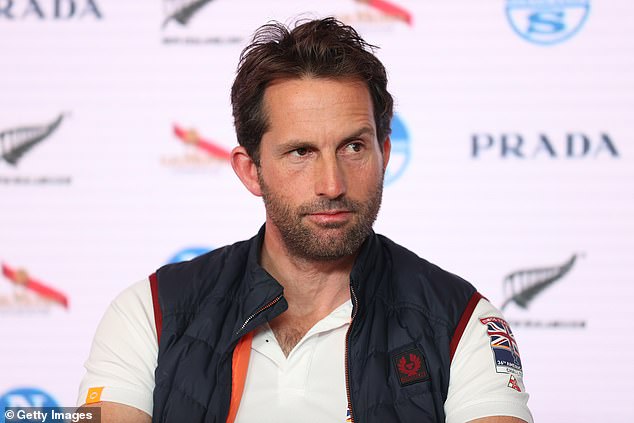 The blame-shifting has infected even one of our knighted Olympic heroes. Sir Ben Ainslie

Since yachting is one of the least spectator friendly of all sports – calling for skyscraper ladders and telescopes on the Jodrell Bank scale – what was the real reason for trying that one on? Seemingly because the weather forecast for the pre-set race days called for light winds, which were expected to favour the Italian vessel.

Tut tut, Sir Ben. Not that the yachties are any-the less adoring. But then it never occurred to those luvvies that there was so much as the slightest question about patriotism when Ainslie previously sold himself to rescue a failing America’s Cup bid by our oldest rivals in this ancient contest, the USA.

Thankfully, he recovered his sense of propriety in time to praise the Italian skipper and his crew for their performance and to wish them well in the final against the Kiwi hosts.

And his initial churlishness, it has to be said, came as more of an out-of-character surprise than the suspicions which continue to swirl around our most celebrated cyclists and long-distance runner.

Time was when lapses into devious practices and rank gamesmanship on British fields of play – more bluntly identified by Souness as dishonesty – were blamed on the malign influence of cynical foreign imports.

Now we have only our own to blame. 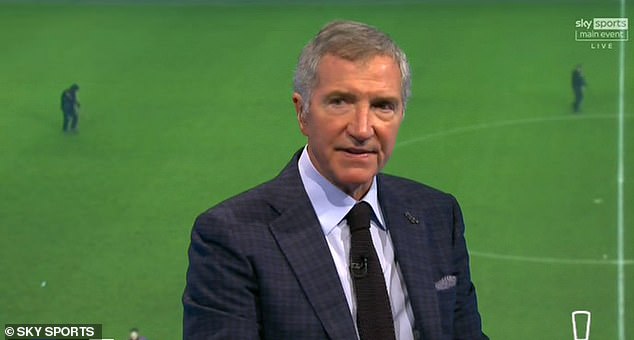 Graeme Souness, as straight as a dye on television as he was on the pitch, has called the tumbling and collapsing in Premier League penalty areas for what it is: ‘Diving and cheating’

The FA and the Government are bending over backwards to usher the fans back into football grounds.

They would like to see Wembley Stadium rammed to 85-thousand capacity for the semi-finals and final of this summer’s delayed 2020 European Championship, in the optimistic expectation that England will be taking part.

And never mind the apparent risk of a mass Covid outbreak just when we are all hoping for freedom. 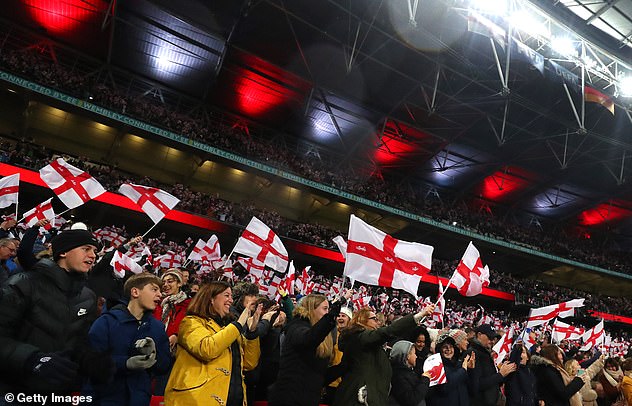 To borrow a phrase from the coronavirus lexicon, the underlying sickness in this manoeuvre is a back-handed attempt to snaffle in its entirety the multi-nation staging of this event for the UK.

Personally, I always regarded UEFA’s notion of finals spread willy-nilly across the Continent, with all the travelling that entails, as absolutely ridiculous.

But what England are up to is rank opportunism, fraught with danger for the community.

Better by far for Westminster and our football authorities to devote their time and energy to this week’s expose by Sky News of the tragedy of thousands of youngsters sold the football dream by clubs only for 99 per cent of them to be willfully discarded. 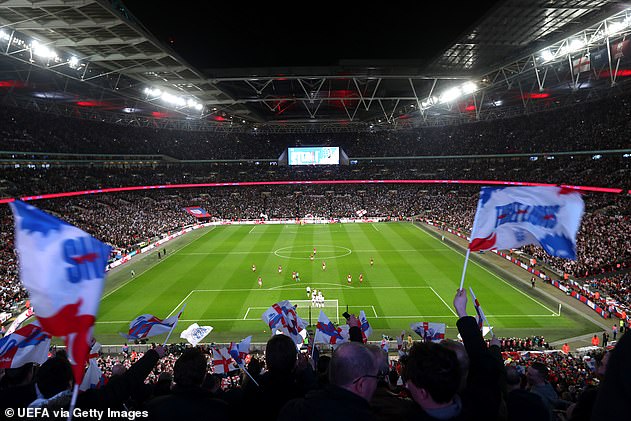 Too many of that heart-broken majority fall into despair, unemployment, poverty, gang crime and in some cases suicide.

Stiffer regulatory powers are needed to prevent clubs throwing their nets over as many kids with two legs and a pulse as possible, then casting almost all of them aside.

Recruiting at a young age needs to be limited to exceptional prospects, restricted to the number who can be assured of pastoral care and proper further education if they fail to make the grade.

That would be more important and humane than playing to the gallery of popular opinion, while putting the population in jeopardy.