Barcelona. The candidates for the presidency of FC Barcelona, ​​Joan Laporta and Víctor Font, were convinced yesterday that Leo Messi generates more than he charges, after the newspaper El Mundo published his contract with Barça.

“Leo generates much more income than the money it costs. We have done a study and it generates a third of Barça’s total income ”, stated Joan Laporta on radio Rac1.

His competitor Víctor Font was also convinced in an interview with radio Onda Cero that Messi generates that and more for the club. To imply that Barça is ruined because of him is an absolutely wrong conclusion.

Both expressed themselves in this way after El Mundo published the contract signed by the Barça captain in his latest renewal: “it amounts to 555 million 237 thousand 619 euros, to be collected in four seasons –from 2017– until its expiration, the next June 30 ”, including salary, image rights and various bonuses and variables.

Laporta and Font condemned what they considered a leak to the Madrid newspaper and insisted on doing everything possible for Messi to remain at Barça at the end of the season, when the contract ends. 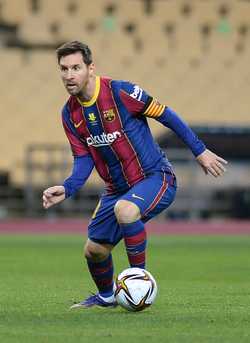 ▲ Joan Laporta specified that Messi produces a third of Barcelona’s income and if he is elected president, he will seek for the Argentine to stay.

It is not only the economic return, since Messi generates a third of Barça’s income, but also the emotional and sporting return, and the moments lived with him. Messi has not ruined the club, but a board of directors that has lost financial discipline since 2015, he said.

Former president Josep Bartomeu, who resigned in October after being criticized by Messi, denied being behind the leak. I’m sorry to hear that I’ve leaked the contract. It is totally false. Messi deserves what he charges for both sports and commercial reasons, he told Catalan television station TV3.

In this regard, the team’s coach, Ronald Koeman, commented: whoever has leaked Messi’s contract cannot have a future at Barça. It would be necessary to respect more a player who has given so much to Spanish football. You have to try to know how it has come out in the press. It is an evil intention to hurt.

On the sporting level, after taking second place in La Liga from Real Madrid, with their 2-1 victory over Athletic Bilbao, in which the Argentine stood out, Barça wants to continue showing improvement in their visit to Granada on Wednesday, in the Copa del Rey. Earlier this Tuesday, Almería will host Sevilla in the Andalusian derby in the quarterfinals.