By Craig Hope for The Mail on Sunday

An evening kick-off on the Saturday before Christmas, this place would have been dripping with ale and festivity in another world.

At least, that is, until the football started. Heavens, they would have needed a drink inside them to stomach what followed.

For it is perhaps best for Newcastle boss Steve Bruce there are no supporters on the Gallowgate End right now. They would not have enjoyed this, and would have let that be known, too. 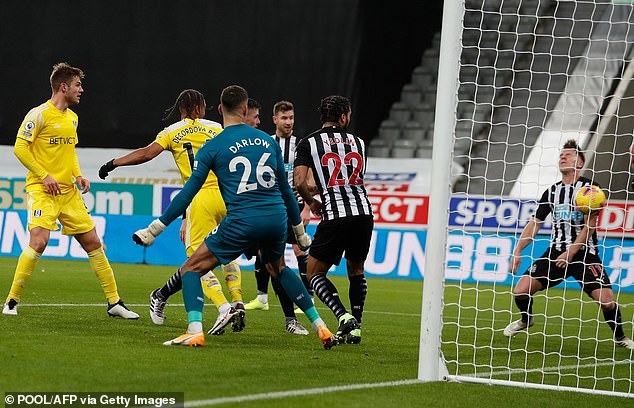 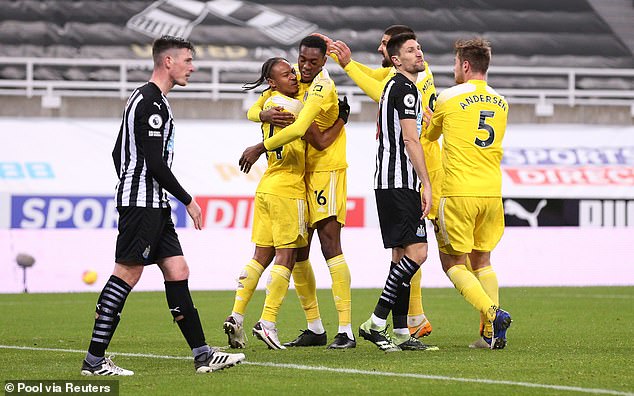 Out-played for more than an hour against promoted Fulham but then handed a lifeline when Joachim Andersen was sent off and Callum Wilson levelled from the penalty spot, Bruce’s side still did not have the wit to win it. Come the dying seconds, they were clinging to a point.

Fans, of course, are desperate to be back in the stands here, but for many the motivation is to voice their displeasure with performances on the pitch.

Bruce can argue, with some justification, that results aren’t bad. This point keeps them eight clear of the bottom three. It was, however, yet another somewhat fortunate accrual.

The game turned just after the hour when Fulham defender Joachim Andersen tangled with Wilson as he strode into the penalty area.

Andersen made little attempt to win the ball. His intention, rather, was to disturb Wilson’s stride. He achieved that and the striker took the invitation to stumble to the turf. Graham Scott pointed to the penalty spot. Gary Lineker, an authority when it comes to the cuteness of winning such decisions, called it a dive.

Either way, Andersen’s initial infringement looked outside the area. Scott was referred to his monitor by the VAR and, after a lengthy delay, he decided that, not only was it a spot-kick, but Andersen should also be dismissed.

‘That decision has decided the game,’ he said. ‘My team were fantastic tonight and we should have had at least a couple of goals by half-time. 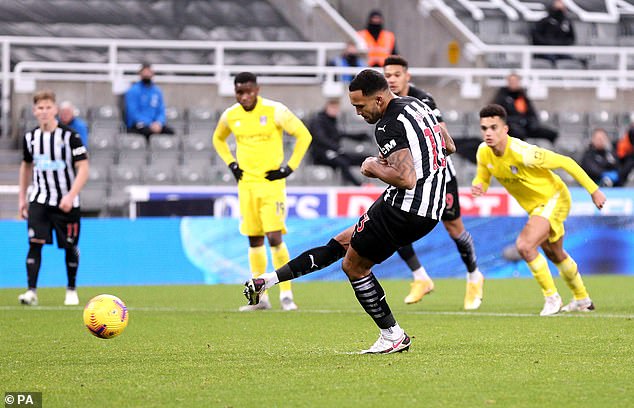 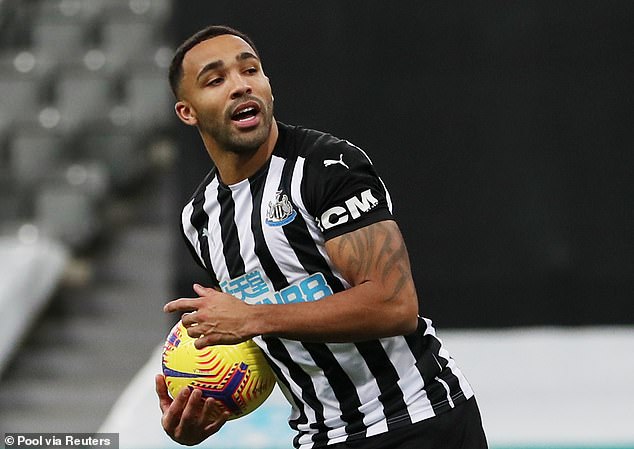 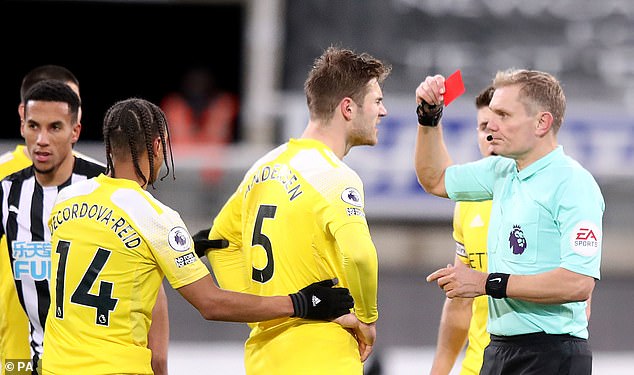 ‘But VAR was brought in to make correct decisions. From what I’ve seen (on the penalty incident) the contact is outside the box. He then goes into the box and dives. The referee then goes to the screen, but I don’t know if he’s looking at the same angles I’ve seen. I just don’t understand it.’

‘For me, he has his shirt outside the box but then clips him inside,’ he said. ‘But it was the only real bit of quality we’ve shown on the night.’

The point he makes about his side’s quality – or rather, the lack of it – was absolutely right. To be fair, he did not hide away from their shortcomings. 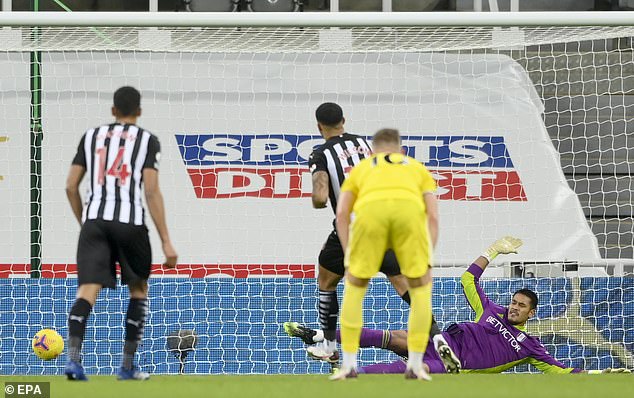 ‘We will take a draw because we haven’t done enough with or without the ball,’ he added. ‘Even with 10 men we struggled to find the quality to get through Fulham.

‘We have to play better than that. When you keep surrendering the ball you’re going to struggle at this level. We did the same at Leeds on Wednesday. It has been a difficult week for us.’

Newcastle looked shot during the closing stages of that 5-2 defeat at Elland Road – conceding three times in the final 12 minutes – and they picked up with the same lethargy here, despite Bruce making five changes.

Among those were recalls for two full-backs seldom seen in recent months. Paul Dummett had not played since January because of injury, while DeAndre Yedlin’s last Premier League start was in July. Bruce just doesn’t seem to fancy the latter. 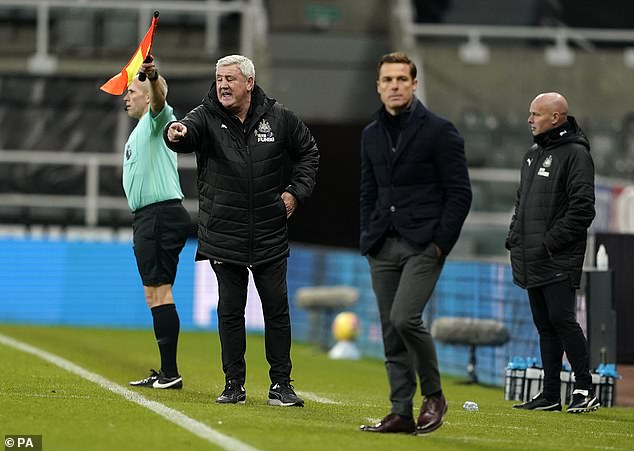 And so it was that the team-sheet wore the look of a side still dealing with a Covid-19 outbreak. It showed, too.

The first-half belonged to Fulham. They had more of the ball – 66 per cent – and the best of the chances. Indeed, there was a 15-minute spell before half-time when Newcastle were spectators. Then again, they’ve ceded possession for 15 months under Bruce, so this was nothing new.

Fulham played the opening period like a side who fancied themselves for victory. The only surprise was that it took them 42 minutes to take the lead.

Newcastle’s Matt Ritchie had endured a wretched night to that point – a player usually so sharp looking blunted by an injury-hit 2020 – and he suffered the indignity of an own goal when Tosin Adarabioyo’s header bounced up into his face and crept inside the post. It was a smack in the chops for Newcastle and Ritchie, quite literally. 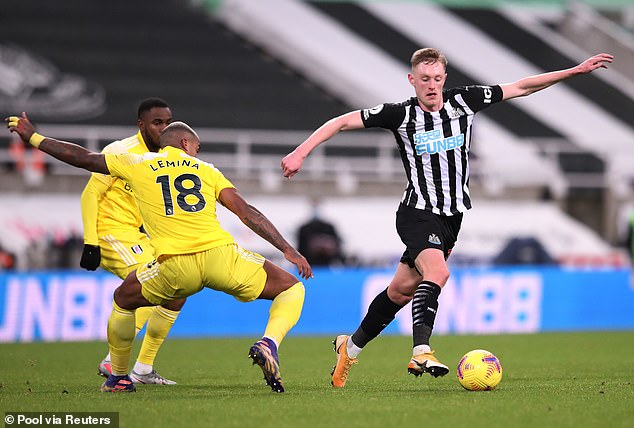 Adarabioyo was afforded space to connect with Ademola Lookman’s corner for the second time in the space of a few minutes, but the goal had been coming for many more. Bobby Decordova-Reid was guilty of two misses when in on goal.

It was a lame offering from the home side during that first 45 minutes, the sort of showing that would have given rise to a chorus of boos on the whistle.

Newcastle, though, have a way of digging themselves out of such holes. Bruce’s detractors call it luck. It has happened too many times now for that to be the sole cause.

But red cards and penalties do have a way of aiding their rescue acts. Fulham had committed bodies forward in search of a second goal just after the hour when Newcastle broke and Jonjo Shelvey fed Miguel Almiron, who slipped a pass to send Wilson in on goal, drawing the foul from Andersen.

After a four-minute stoppage for those VAR checks, Wilson kept his cool to slot home an eighth of the campaign. The £20million spent on him looks like being the difference between mid-table and the bottom of it for Newcastle this season.

Recap all the action as Sportsmail’s BEN MILLER provided live EPL coverage of Newcastle vs Fulha.