While Arsenal’s 0-0 draw with Manchester United on Saturday had plenty of chances, it was yet another example of a goalless game between two of the Premier League’s Big Six teams.

Perhaps the scoreline was inevitable, given Manchester United’s results against the other members of that particular group this season – Arsenal, Chelsea, Liverpool, Manchester City and Tottenham.

Before Sunday’s trip to Emirates Stadium, Ole Gunnar Solskjaer’s side had scored in only one of five such meetings – the 6-1 defeat by Tottenham in the unusually free-scoring opening weeks of this unique season.

That’s 538 minutes Manchester United have played without scoring a Premier League goal against this group of clubs. Last season, in the same fixtures they have played so far, they drew a blank twice but still scored every 60 minutes, on average.

But is is not just United who have found goals hard to come by in these games, highlighted by the fact four teams have also failed to score against them, plus there was Chelsea’s goalless draw with Spurs in November.

So have matches between the big teams become more cagey and, ultimately, more boring?

Heading for a Premier League record

So far this season there have been 17 meetings between the Big Six, five of which have ended goalless.

That is already the second-highest number of 0-0s between these teams in Premier League history – and we are only halfway through the season.

Only once in the past decade have there been as many goalless draws in a season. That was in 2015-16 and that was after 38 rounds of matches.

Perhaps surprisingly, it has not always been the case that these meetings of the Champions League-chasing clubs are cagey affairs.

In six of the past 10 seasons, there have been more goals per game in meetings of the Big Six than in matches across the Premier League season as a whole.

This season there have been 0.58 goals fewer per Big Six match than in all top-flight fixtures, a bigger negative difference than in any of those previous 10 campaigns.

The current trend of 36% of these games finishing goalless means there is surely an inevitability about this season having the highest number of 0-0 draws between these teams.

But what about the goal tally overall?

In large part because of all these shutouts, this season has the lowest average goals-per-game in matches between the teams in 15 years – and the third lowest overall.

And if that unlikely 6-1 Tottenham win against Manchester United had not happened, this would be the lowest goals-per-game in these matches by some distance.

So why the lack of goals this season?

The goalless draw – whether it is the deadly dull stalemate or simply a good game that ends without a goal – will be part of football’s fabric forever but the behind-closed-doors circumstances the Premier League finds itself in this season may just be a contributing factor to the number of deadlocks.

Having attended several of these fixtures this season, it is hard to escape the feeling that some would have played out differently had crowds, and the noise, passion and adrenalin rush they provide, been an added factor in the atmosphere.

The Manchester derby at Old Trafford in December was a classic example, with both United and City seeming, to the naked eye at least, to be settling for a goalless draw long before the final whistle as a dismal game petered out in tedium. 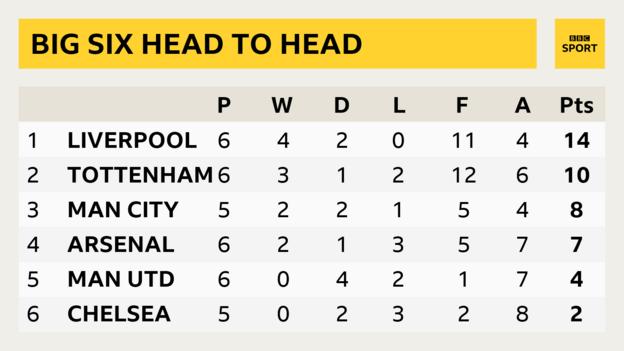 Would there have been such a timid conclusion had Old Trafford been packed with 75,000 fans, with the Stretford End urging Solskjaer’s side on for the winner, or with City’s fans packed in their traditional corner of the stadium demanding a bolder approach than the “what we have we hold” strategy that seemed to be the visitors’ game-plan?

We will, of course, never know but this was one occasion where it certainly felt like the absence of fans not only contributed to an ultra-conservative approach but the spectacle itself, as a game that was billed as a potential Premier League classic failed to raise any pulse rates.

And what about the goalless draw between Liverpool and United at Anfield earlier in January?

There were clear chances in the second half, mainly for United, but again this was an occasion usually laced with rivalry and hostility that felt like it seriously missed the presence of the Kop demanding Liverpool surge forward for a typical late rally, which in this case they did not, or United’s following pushing their side from the Anfield Road end.

Some follow a traditional pattern of a reasonably entertaining game that just ends goalless, like United’s draw at Arsenal, or a poor game that deserves to end goalless such as when they met Chelsea at Old Trafford.

And of course there are other mitigating circumstances as well as the absence of fans. For example, when Manchester City scored once in three games against Liverpool, Tottenham and Manchester United in November and December, they were adjusting to life without a recognised striker.

There are, however, times – and this is inevitable given the lack of atmosphere inside stadiums in the pandemic – when you miss supporters even more and feel they could have created more of an environment of excitement that may have brought goals.

Oops you can’t see this activity!

To enjoy Newsround at its best you will need to have JavaScript turned on.