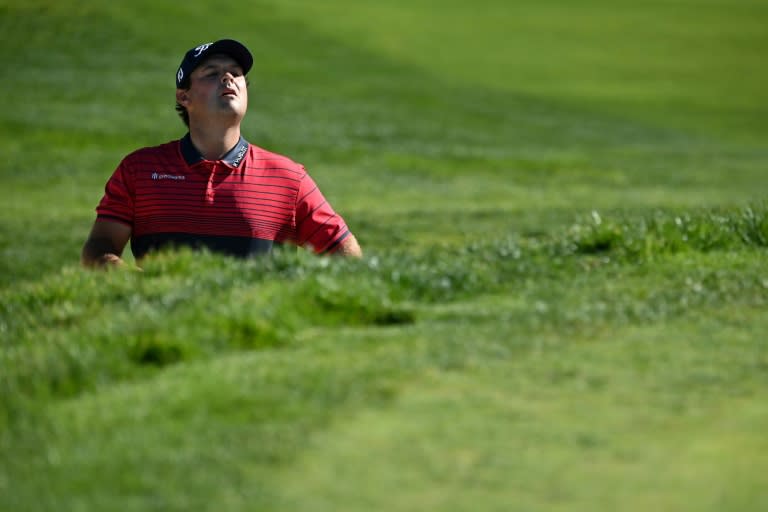 Rivals were upset at Patrick Reed over a rules controversy after his US PGA victory Sunday, many feeling he violated the spirit of golf if not the letter of the law.

Reed fired a four-under par 68 on Sunday at Torrey Pines to complete a five-stroke victory at the Farmers Insurance Open, but his actions over an embedded ball at the par-4 10th hole in Saturday’s third round left a cloud over the triumph.

His second shot bounced and landed in deep rough, but neither Reed, his playing partners and caddies or a nearby volunteer saw the bounce that television cameras clearly showed.

Reed lifted the ball, checking to see if it was embedded, then called a rules official who checked and confirmed an indention in the ground, ruled the ball embedded and allowed Reed a drop with no penalty.

“I think the rule is if you’re in doubt on something that’s going to give you an advantage and it’s not 100%, then you kind of go the other way,” 2019 Houston Open winner Lanto Griffin said.

“So it’s tough to see, it’s sad, kind of pisses us off, but it’s the way it is. Hopefully something changes and come to a conclusion.”

Reed said he had put the controversy out of his mind Sunday once told by officials his actions were proper.

“The biggest thing is I was allowed to kind of put it behind me when the head rules official comes up and says you did everything you were supposed to do,” Reed said.

“When you do everything you’re supposed to do, at the end of the day that’s all you can control.”

Social media critics accused Reed of cheating but rules officials after the round and the PGA Tour on Sunday ruled Reed did nothing improper.

“He did everything by the book according to the official and everyone stood by there,” said four-time US PGA Tour winner Xander Schauffele.

“Obviously the talk amongst the boys isn’t great, I guess, but he’s protected by the tour and that’s all that matters, I guess.”

Four-time major winner Rory McIlroy, who was involved in his own embedded ball situation at 18 on Saturday and found to have acted properly, gave Reed the benefit of the doubt.

“It seemed to me like it was a bit of a storm in a teacup,” McIlroy said.

But in a sport where players are expected to call penalties on themselves, obeying the rules and being fair to the field can be different things.

“It’s tough,” Griffin said. “Golf’s a game of sportsmanship and it’s tough to put us in the spot to call him out because we weren’t there.

“But at the end of the day I think 99% of the golfers out here, if it’s in question one way or the other, they’re going to go the other way.”

McIlroy said he avoided taking the best possible lie he could on a free drop at last year’s PGA Championship.

“I gave myself a worse lie to just try to be fair to the field and the tournament in general. I’ve never tried to get away with anything out here,” McIlroy said.

It’s not the first rules issue to hit Reed, who was penalized two strokes at the 2019 Hero World Challenge for moving sand behind his ball to improve his lie, something he said he did not see because his angle was different from that of TV cameras.

“It’s the worst thing in golf to be labeled as someone that tries to get away with something or labeled a cheater,” McIlroy said. “That’s just not how you want your reputation to be.”

Asked what he had to say to those who thought he cheated, Reed replied, “I’ve already said anything I need to say about what happened yesterday.

“All I can really do is focus on today and just listen to what the rules officials said and they said that I didn’t do anything incorrect.”