By Kieran Gill for the Daily Mail

If Brendan Rodgers is to break his Europa League hoodoo, there is work to do at the King Power Stadium next week after the away goal eluded Leicester on Thursday night.

Rodgers’ record in this competition’s round of 32 reads four attempts and four exits – twice suffered with Liverpool, and twice with Celtic. Leicester remain favourites to qualify from the second leg against Slavia Prague, whose stadium did not earn rave reviews from the visitors.

‘Terrible football pitch with terrible football,’ goalkeeper Kasper Schmeichel said after their performance in the Czech capital on Thursday night. ‘It didn’t lend itself to going out and playing pretty football.’ 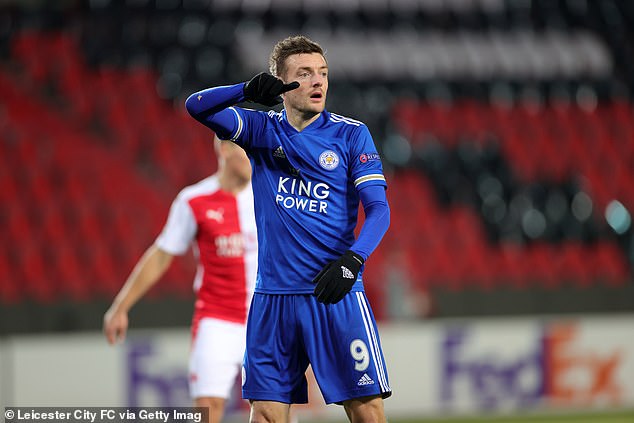 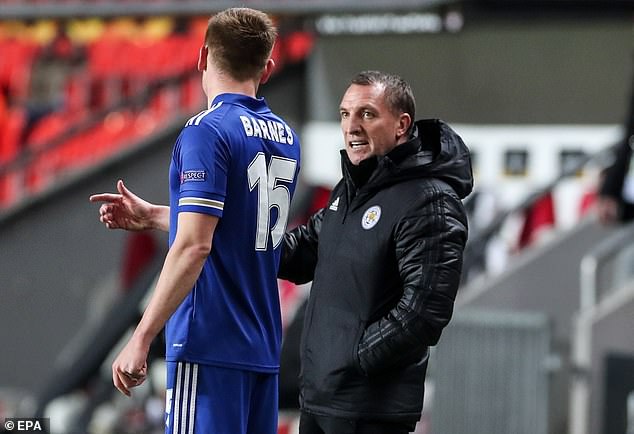 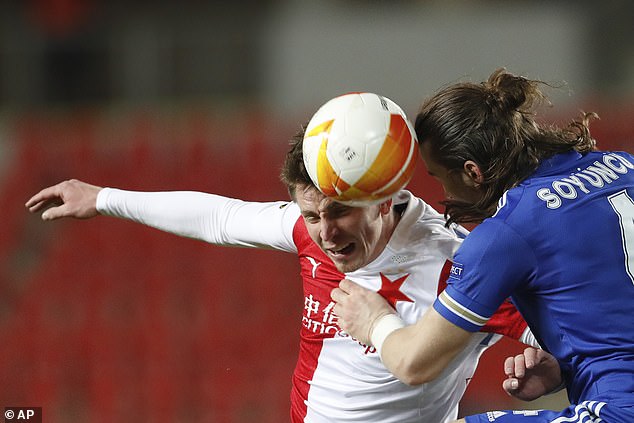 Rodgers also described the pitch as ‘difficult’ while criticising the refereeing team.

Jamie Vardy lasted an hour here but may be needed for a full 90 in the second leg after his replacement, Kelechi Iheanacho, was cautioned within 10 seconds of his introduction.

It was a questionable yellow card from Italian referee Marco Guida, given for an apparent arm into the face of Jakub Hromada, and leaves Iheanacho suspended for the next tie.

Slavia’s players, it has to be said, were throwing themselves to the ground in search of bookings.

Nevertheless Rodgers was left looking at the positives of Thursday night’s result.

‘This is a team that dominates their league, win games, score lots of goals, they average about three a game,’ Rodgers said. ‘We kept them reasonably quiet.

‘When you come away, it’s important you defend well. You’ve got to stay strong and be aggressive. Our spirit was good, we’ve kept a clean sheet and we’ll look to the second leg.’

Harvey Barnes was the stand-out player on a night when Leicester’s attack otherwise struggled. 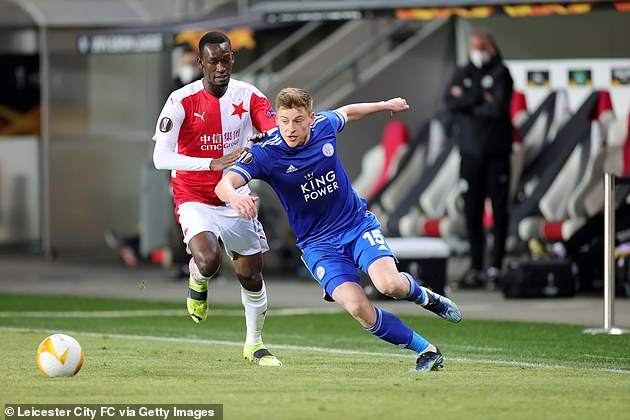 Slavia had 600 supporters in attendance, though Rodgers afterwards questioned that number, saying he felt there were more inside the stadium. The hosts also used the empty seats in their main stand to spell out the words: ‘Fox hunting.’

That attempt at intimidation did not work on Barnes who caused the Czech champions plenty of problems.

Leicester would have taken the lead in the 15th minute were it not for Slavia goalkeeper Ondrej Kolar keeping his legs closed. Barnes had broken behind into space left by right back Alexander Bah and tried to finish by nutmegging Kolar, who blocked the shot.

Leicester couldn’t get going in the second half and Schmeichel was forced to make two saves to deny Nicolae Stanciu.

Vardy was removed and replaced by Iheanacho, who had an unfortunate instant impact. While contesting a throw-in, he caught Hromada, and will miss the second leg as a result.

It will all come down to next week, but Leicester feel confident of playing their way and beating Slavia once back on their nicer King Power pitch. 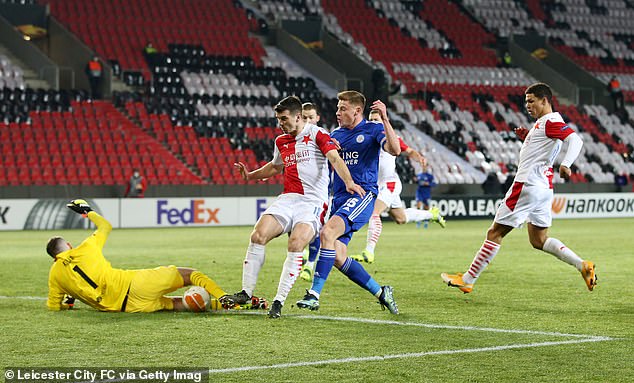