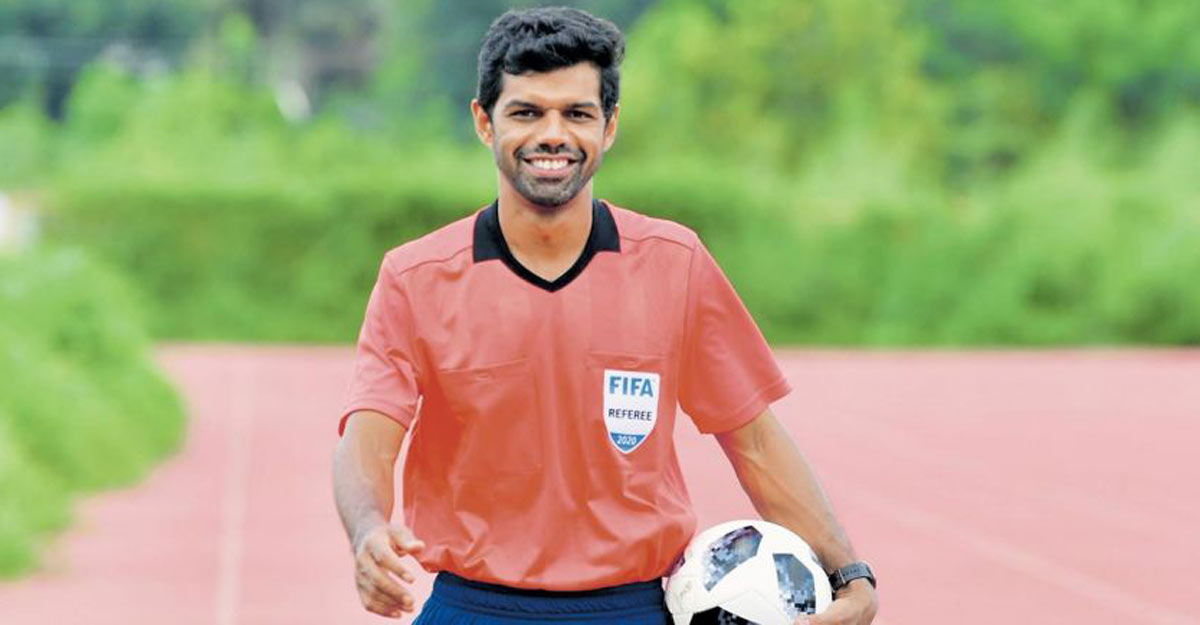 It was a sweltering Friday afternoon and a carnival atmosphere had set in Kolkata. The iconic Salt Lake Stadium was bathed in a glow of blue and white as Latin American giants Argentina took the field against Venezuela in an international friendly on September 2, 2011. The entire crowd erupted with cheers when Lionel Messi, widely regarded as one of the greatest players of all time, made bows in all directions while waving his hands about in the air.

Amid all the furore and the frenzy, there was one man who emerged from the locker room and walked to the field with a straight face, trying hard to keep his emotions in check. It was Rowan Arumughan, who officiated in that historic tie on Indian soil.

Whistling his way to the top

A native of Mankara in Kerala’s Palakkad district, Rowan joined the Indian Air Force in 1997. Passionate about football since childhood, he went on to play for the Air Force team for three years as a centre-back until an injury forced him to retire from professional sports at a young age.

“Football was my first love and it was tough for me to stay away from the game. So I decided to take up coaching. But it was mandatory to have playing experience of at least five years to become a coach. As I had played only for three years, I gave up on my ambition of pursuing a coaching career. It was then the gaffer of the Ai Force team asked me to attend a clinic for aspiring football referees held at the Naval Base in Kochi. To be honest, I agreed to go only because I was excited at the prospect of going home and visiting my family. However, after attending the training programme I decided to take refereeing seriously. When I was transferred to Delhi I started officiating in matches in the local football league which provided me with the practical skills to be a professional match official.

A match between Syria and Lebanon at the 2010 Nehru Cup is still vivid in Rowan’s memory.

“The football rivalry between these two countries is as fierce as the India-Pakistan cricket matches. When they take on each other, the encounter generates a lot of interest due to the political tensions between the two nations. During that match, Syrian players crowded around me claiming that I denied them a clear penalty. They remonstrated furiously and started pushing and shoving me, but I stood firm. Angered by their behaviour, the crowd started booing. The situation was getting out of control and the match had to be stopped for 12 minutes. By the time the match ended, I was physically and mentally drained. I had to deal with the pressure of officiating my first-ever international match as well as the unruly behaviour of the players. It was a good lesson for me. Thereafter I attended FIFA’s development courses and training programmes that helped me achieve improved mental toughness to handle such situations.”

In fact, Rowan was getting ready to go to Kolkata to watch the friendly match between Argentina and Venezuela. He had availed leave and booked a ticket for the match. It was then he received a surprise call from the All India Football Federation (AIFF).

“Exactly a month before the match, I got a call from a top AIFF official. When he said I would be officiating in the match between Argentina and Venezuela I could not believe my ears. How can I? I was planning to go to watch the match but fate had something else in store for me! The next week I spent preparing for the game. I was a bit tensed to officiate in a match featuring some of the big names in world football such as Messi and Angel Di Maria. It was also Messi’s first match as Argentina’s captain. I felt he was also nervous during the toss. But, everything changed once the game got underway, and in the end, Argentina won the match, thanks to a 68th minute strike by Nicolas Otamendi.”

As per the Laws of the Game, referees cannot interact directly with players before or after a match. Because of that rule, Rowan could not talk to Messi or click a photograph with him after the match despite being on the pitch with his idol for over 90 minutes.

“It was a great honour to be part of the I-League and the Indian Super League. Although I cannot officiate in other tournaments due to FIFA’s restrictions, I watch matches at all levels. I have huge respect for our local referees who make quick decisions without the assistance of any technology. There are many things to be learnt from them.”

Although the AIFF has not sanctioned the use of the Video Assistant Referee (VAR) technology, Rowan is the only Indian referee who holds a VAR certificate. Once has to undergo extensive training and clear tough tests to be a VAR certified referee.

“In the initial phase of VAR examination, candidates will have to watch the real-time video streaming of a match and make decisions. It will get tougher in the next phases. I cleared all the gruelling tests and obtained the VAR certificate in 2018.”

“Like players, fitness is a critical part of succeeding as a referee. We dedicate a large proportion of our overall training to the development of physical capacity. Referees will have to undergo fitness assessment challenges such as the Yo-Yo test to prove their aerobic endurance fitness on a regular basis.

“I had struggled with my fitness after I left the Air Force. I quit the job to take refereeing seriously, but it threw my fitness routine out of gear. I got my workout regime back on track after I joined the Olympic Club in Palakkad. Here I train along with many national-level athletes under the guidance of instructor Haridas. It gives me an opportunity to self-reflect and consider what my strengths and weaknesses are.”

Rowan is now dreaming of officiating in the FIFA World Cup, the pinnacle of the beautiful game. It is the FIFA Referees Committee which selects referees and assistant referees for the quadrennial event from a list of candidates proposed by affiliated associations. Having officiated at the top level in Asia, Rowan has every reason to be optimistic. Among Indian referees, he has the best chance of making the cut.

“Officiating at the World Cup is the ultimate dream for any referee. I believe my sound track record and fitness levels would help me realise that dream. However, I cannot be over-confident because it is up to the governing bodies to decide. I believe if there are things you are destined to achieve, you will definitely achieve them.”

After quitting his Air Force job, Rowan settled in Palakkad with his wife Binuja and children Taniha and Ishika. Currently, he is in Qatar officiating in the AFC Champions League matches.