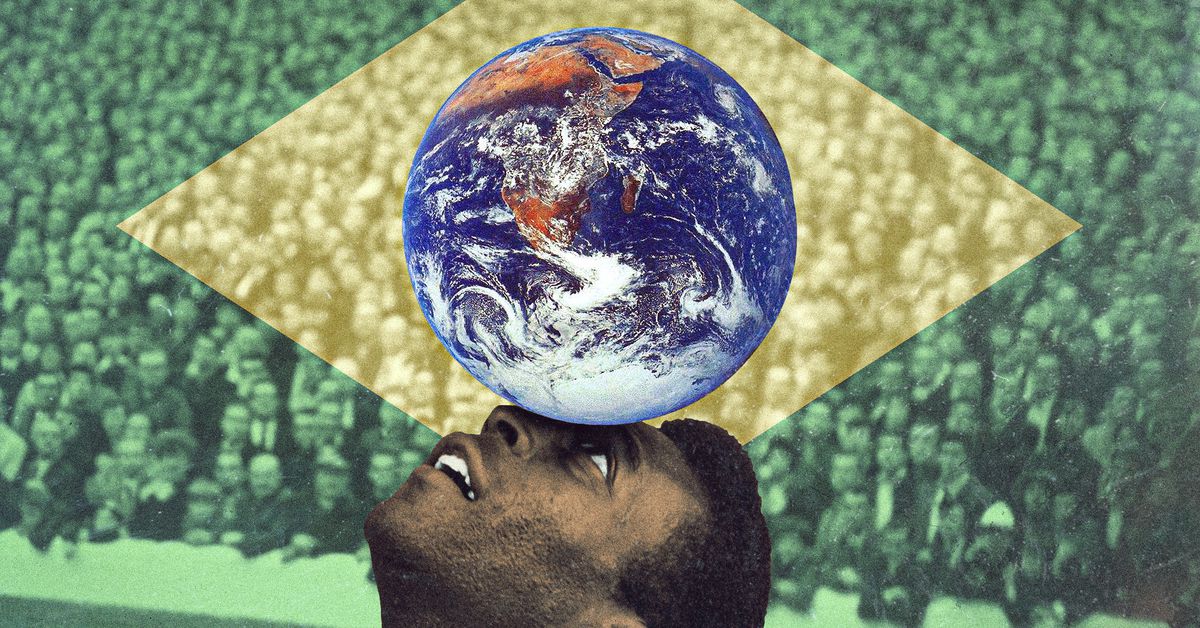 Being immortal is hard work. If you are cursed to live forever, then you have to defend your legend, or at least be held accountable for it, every single day of your existence. Gods do not get days off.

Just look at Pelé. He became immortal at the age of 17 and, in one sense, he has not taken a break since. Seventeen was the age when he went to Sweden in 1958 and crafted a cathedral to his own greatness. That was when, as the youngest and best member of Brazil’s World Cup squad, he helped himself to six goals in the tournament, including two in the final as his country defeated the hosts 5-2. From then on, Pelé became an industry and he and his image were relentlessly revered, exploited, and consumed the world over.

And what an image. Pelé was so easy to promote because he emerged perfectly formed. He was technically and tactically superb, and he played with the confidence not of a fearless youngster but of a veteran. His red-carpet smile made him the cover star of countless magazines and his distinctive haircut, that high-top fade, made his profile the most distinctive silhouette until the arrival of one Michael Jeffrey Jordan. Football had never before seen his blend of speed, skill, agility and vision.

Yet never before in sports, and never again, will the person at the center of an entertainment industry have to do so much to service their own myth. Pelé retired from playing football at 33, an age which looks remarkably young until you consider that, by that time, he had played in 1,363 games: almost 75 games per season, or one game about every five days, for 18 years.

During that time, Pelé achieved a goal tally of which he was notably proud, finding the net 1,281 times, or 0.94 times per match. That tally has more recently been the subject of much mockery, with the observation being made that several of these games were friendly matches. That observation misses the point. Pelé was not just paid to play football: He was paid to be paraded. The physical demands placed upon him would have horrified most modern physiotherapists, and probably quite a few of his era.

Just take, for example, the month of June 1959, a year after Pelé won that World Cup. He played 15 matches against clubs from Holland, Italy, Germany, Spain, Portugal, Belgium and Brazil in that month alone, scoring 20 times. His opposition could vary greatly in quality, but the demands on him and his body did not. He was expected to be Pelé at his best every single time, as if he were a touring musician or circus act. It is understandable that people, when comparing the number of goals scored by Pelé, Leo Messi, and Cristiano Ronaldo, would want to disregard these exhibition matches. In one sense, it is also a meaningless comparison, because—for all their astonishing consistency across the years—Messi and Ronaldo were never asked to deal with this excessive workload, with minimal time for recovery between contests. They were never asked to play more friendlies than competitive games. Meanwhile, Pelé’s promotional career—in terms of the matches that occupied his schedule—was even larger than his professional one.

In another sense, too, it is hard to argue that Messi or Ronaldo are better than Pelé, simply because they played so many decades apart. Watching footage from 1958 alongside footage from 2007, when a 19-year old Messi announced himself to the world with a hat-trick for Barcelona against Real Madrid, the most striking difference is in the speed of play. In the 1958 World Cup semifinal, as Pelé prepares to shoot, a French defender seems to amble rather than dash towards him; in 2007, as Messi gets ready to score his third goal, defenders fling themselves into his path with the elasticity of elite long jumpers. There is a great chance that someone as dominant in his era as Pelé was would still be dominant now, but we cannot know for certain.

The impossibility of knowing, though, is no comfort to Pelé. When it comes to football, he is a god, but as gods in other contexts know all too well, the mere act of being in heaven does not make you immune from challenge. If Pelé were a Greek god, he would be Zeus: the greatest of names in his firmament, frequently acknowledged as the king of all he surveys, but constantly getting himself into conflicts with supposedly lesser beings.

Take, for example, the subject of his comparison to Messi. It might be thought that Pelé was so sure of his own achievements that he was not threatened by anyone else, but his judgment of the Argentinian genius in 2018 revealed a certain insecurity. In short, he went full Zeus. Speaking to Brazilian newspaper Folha de Sao Paulo, Pelé argued, “How can you make a comparison between a guy who heads the ball well, shoots with the left, shoots with the right and another who only shoots with one leg, only has one skill and doesn’t head the ball well? How can you compare? To compare with Pelé, it has to be someone who shoots well with the left, shoots well with the right and scores headers.”

Leaving aside the fact that to criticise Messi for mostly using his left foot is like complaining that Michelangelo did not paint enough with his right hand, it is easy to see why Pelé sometimes seems indignant. Time and again, he is reminded that he was only the greatest for back then, not of all time—an icon of the black-and-white TV era, while Diego Maradona and, arguably, Messi are the kings of everything that we have witnessed in technicolour. What’s more, Pelé had the pressure of being one of the first young footballing superstars, a level of scrutiny which should have been overwhelming. That weight of expectation was not particularly kind to George Best, or more recently to Mario Götze. Not only did Pelé bear that weight, he thrived under it, leading Brazil to another World Cup victory in 1970.

Maybe, despite being celebrated for decades, Pelé still feels that he is not praised enough. It is important to remember the context in which he made his name. He was a dark-skinned Black man raising the global status of his country to thrilling heights just 70 years after it had officially ended the enslavement of Black people. He began achieving these feats on the world stage just a year after Ghana had become independent from its colonial power in 1957, and while apartheid had been underway in South Africa for just 10 years. By the time he arrived in New York to play for the Cosmos in 1975, interracial marriages had been legal in all parts of the United States of America for less than nine years. Black people were not meant to wander across the world as freely as he did, and for that he will remain an icon.

If there are severe caveats to his legacy, then they consist mainly in how he used his platform—or, more to the point, how he did not. Pelé’s ascendancy came during an era where Black anti-racism activists were being murdered in droves, and his peak coincided with the assassinations of Dr. Martin Luther King, Malcolm X, and Fred Hampton. Yet when it came to politics, Pelé—unlike his contemporary, Muhammad Ali—remained studiously silent, even as his country plummeted from the somewhat optimistic democracy of the 1950s and early 1960s into the dictatorship of the Médici years.

It is striking, in a new Netflix documentary about Pelé, to see what his friends and associates say about his reticence when it came to politics. Juca Kfouri, an esteemed commentator, points out that Ali took his stand in a democracy, which was meant to be far safer than living under Brazil’s authoritarian rule. Yet that would have been of little comfort to Ali, several of whose friends were being killed in that same democracy. By contrast, there is the assessment of Paulo Cézar Lima, who was a member of Brazil’s World Cup-winning squad in 1970. “I love Pelé, but that won’t stop me from criticising him”, says Lima. “I thought his behaviour was that of a Black man who says, “Yes, sir.” A submissive Black man, who accepts everything and who doesn’t answer back, question or judge. It’s a criticism I hold against him to this day. Because just one statement would have gone a long way in Brazil.”

That statement never came. Given how vigorously Pelé has protected his brand in recent years, it is fair to say that he is not so much submissive as supremely self-aware. He has long known exactly what he is worth, and how quickly he would pay some cost for speaking out against authoritarian rule. There is a wide range of things Pelé could perhaps have done in this political climate, and perhaps he felt that, by staying in Brazil and playing his best, he was providing enough of a service to his fellow citizens. What is striking, though, is that even since Brazil’s escape from dictatorship in 1985, Pelé has not been significantly more vocal on social issues; that, in itself, speaks volumes.

If Pelé has been unfortunate at all—and unfortunate is a strange word to describe someone who has won so much, earned so much and been so beloved—it is that he was the first to be globally adored, and the first inevitably has to give way. His joy, and his curse, is that he has set the standard by which others are judged. The problem with setting the standard is that eventually the standard leaves no one in awe, the same way that there is little international fanfare whenever someone now climbs Mount Everest. What Pelé did at the 1958 World Cup was football’s equivalent of the moon landing, but now NASA’s probes barely glance at the moon on our way to Mars.

For better or worse, Pelé is our yardstick. A key reason we were so dazzled by a young Ronaldo at the 1998 World Cup and a younger Kylian Mbappé at the 2018 World Cup was that they reminded us of his feats in 1958, 1962, and 1970: that to dominate this tournament was a sure path to instant legend. And that is where Pelé, for all his concern that he will be a forgotten older god, must eventually find his comfort. Because people will always seek new gods, the ones to whom they can relate in their eras. But whoever those gods may turn out to be, Pele’s legacy is to be the canvas on which they must paint their greatness.