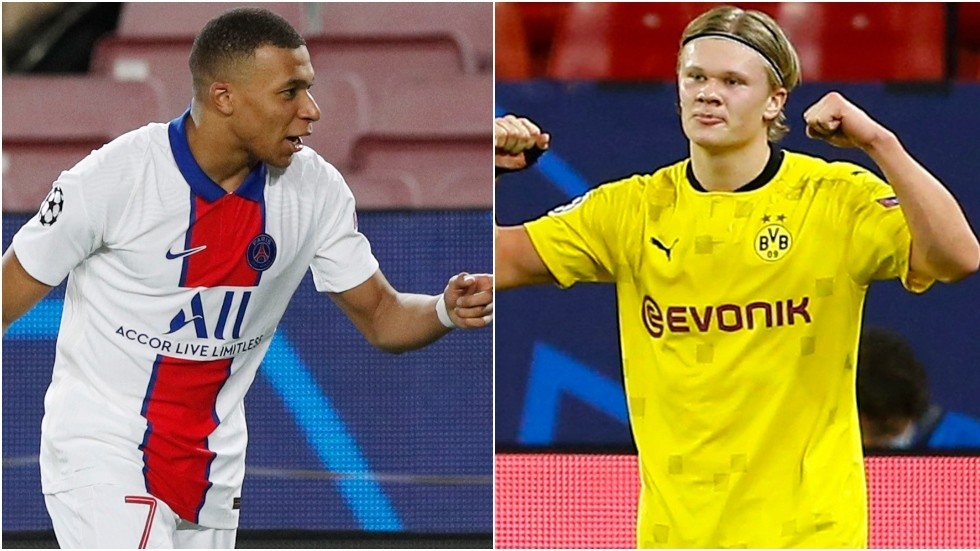 Football fans have talked up the prospect of Erling Haaland and Kylian Mbappe battling it out in a new-generation rivalry to take over the mantle from ageing icons Lionel Messi and Cristiano Ronaldo.

Haaland struck twice for Borussia Dortmund as they took control of their Champions League last-16 tie against Sevilla with a 3-2 win in Spain on Wednesday.

The 20-year-old star later claimed motivation from Paris Saint-Germain sensation Mbappe, who 24 hours earlier had hit a stunning hat-trick in his team’s 4-1 win against Barcelona.

“It was good to score goals. I love the Champions League and when I saw Mbappe score the hat-trick yesterday I got free motivation so thanks to him,” said the big Norwegian as he took his tally in Europe’s premier club competition to 18 goals in just 13 appearances.

Haaland had previously become the fastest player to reach the five-goal and 10-goal marks in the Champions League, and averages a staggering 1.64 goals per 90 minutes in the competition.

World Cup winner Mbappe holds the record for the most goals scored in the Champions League before the age of 21, having struck 19 before reaching that landmark – but with Haaland not reaching that age until July, he will be tipped to catch that tally.

Also on rt.com
Mbappe’s brilliance shows Messi may need PSG more than they need him

The pair’s heroics have fueled talk from football fans of a changing of the guard at the top of the game, after Messi suffered another night of Champions League ignominy with Barcelona on Tuesday and Ronaldo drew a blank in a frustrating 2-1 defeat for Juventus against Porto 24 hours later.

“Haaland saying Mbappe’s hat-trick motivated him tonight. That reminds me of when Ronaldo and Messi used to be like that during their prime years. The new era and the new rivalry looks promising,” wrote one fan.

Haaland saying Mbappe’s hat-trick motivated him tonight. That reminds me of when Ronaldo and Messi used to be like that during their prime years. The new era and the new rivalry looks promising.

“The Ronaldo and Messi torch has been passed to Kylian Mbappe and Erling Haaland, two unbelievable talents that will rule the game for years to come,” added football-mad impressionist Al Foran.

The Ronaldo and Messi torch has been passed to Kylian Mbappe and Erling Haaland, two unbelievable talents that will rule the game for years to come.

Looking at the stats, Haaland and the 22-year-old Mbappe are both charting early numbers which suggest they could go at least some way toward rivalling the feats of the illustrious Messi-Ronaldo duopoly which ruled over the game for so many years.

Erling Braut Haaland is truly… something else. Really, no words can express what an anomaly he is. Here is is compared to Messi, Ronaldo, Lewandowski and Mbappé at his same age. Great respect for this 20.5 year old kid. 13 matches, 18 goals. Simply wow. pic.twitter.com/g0qcgQwny1

CL goals since start of last season:Messi + Ronaldo: 15Mbappe + Haaland: 28change happens slowly, then all at once

However, Ronaldo in particular was a slow starter in the Champions League in goal-scoring terms and did not score until his 30th game in the competition, back when he was a marauding winger at Manchester United rather than the apex predator he would evolve into.

Since then, the 36-year-old Portuguese star has become the competition’s all-time top scorer with 134 goals – putting him 15 ahead of Messi.

The pair also boast a glut of records in the Champions League, including both scoring eight hat-tricks in the competition.

Ronaldo was the first of the pair to score 100 Champions League goals, although 33-year-old Messi did so more quickly, taking 123 games to reach the mark, compared to Ronaldo’s 144.

Domestically, some fans pointed out that Ronaldo and Messi have plied their trade in leagues traditionally considered the strongest in Europe, as opposed to Ligue 1 – where Mbappe regularly fills his boots with goals – and the Bundesliga, where Haaland now terrorizes defenses.

Consistency will also be key for Mbappe and Haaland if they are to truly stand a chance of rivalling Messi or Ronaldo in the long term, and fans pointed out that the pair will need to hit the heights consistently for at least the next decade.

Before you compare Mbappe and Haaland to Ronaldo and Messi, at least let them share the podium for 5 years. Just 5 years, not the more than one decade the ????s have done it.

Kylain Mbappé and Erling Haaland are balling. Good for them and I wish them the best of luck but there will never be a rivalry like Cristiano Ronaldo vs Lionel Messi.

For football fans, it will be an intriguing prospect to watch them try.