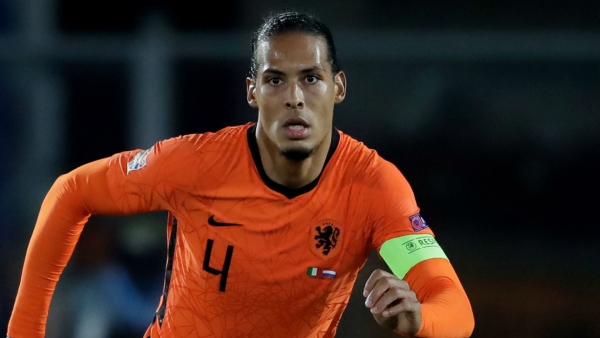 Virgil van Dijk is on track to be fit for the European Championship later this year, according to Netherlands head coach Frank de Boer.

Liverpool centre-back Van Dijk has been out since a 2-2 draw with Everton in October, when he sustained a serious knee ligament injury following a heavy challenge from Jordan Pickford.

Van Dijk’s influence has since been notable in its absence for the Reds, for whom he played an integral role in ending their 30-year wait to win the English top-flight title in 2019-20.

Last season Van Dijk attempted more passes (3,255) than any other defender in the Premier League, while only two other defenders with more than 1,500 had a better completion rate than him (89.2 per cent).

On top of that, Trent Alexander-Arnold (3,664) was the sole defender to have more touches of the ball than Van Dijk (3,624), his 239 duels won was the fifth best among rearguard players and his 191 aerial wins was bettered by only James Tarkowski (199).

Van Dijk has posted a series of videos on social media recently, including one in Dubai where former Netherlands midfielder Clarence Seedorf assisted the defender with his rehabilitation.

Liverpool manager Jurgen Klopp recently said Van Dijk still “has a long way to go” and it is uncertain if he will play for the defending champions in the rest of this campaign.

But De Boer has optimistically claimed the 29-year-old, who captains the Dutch national team, should be contention to play in the delayed Euro 2020 tournament provided he does not suffer any setbacks.

De Boer told De Telegraaf: “If Virgil doesn’t get a kick-back and things go a little faster than expected, he should be able to make it for the opening European Championship match on June 13 against Ukraine.

“He is busy with so much energy. If you see what he’s doing…In my time you were only allowed to kick in the swimming pool.

“He is very important for our team, on and off the field.”

Van Dijk has won 38 caps for the Netherlands since he made his debut in October 2015.