In the 52nd minute of Paris Saint-Germain’s win against Barcelona, Kylian Mbappe produced a magical run whilst the scores were still level to charge forward.

Mbappe collected a loose ball pretty deep into his own half before effortlessly gliding past Lionel Messi.

The flair-filled forward didn’t stop there though, he was crowded out by Pedri as well, jinking past the starlet before he knocked the ball past Sergio Busquets and made the star look like a statue.

This move didn’t amount to much but the Frenchman, who had one goal to his name at the time, went on to score a remarkable hat-trick as he ran riot. This moment was a real sign of things to come.

Pictures from beIN Sports and the Champions League. 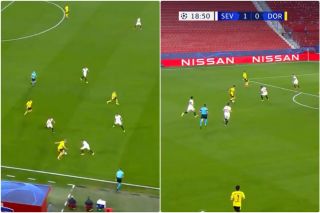 Mbappe was a real sight to behold against the Catalan outfit last night, it’s amazing to think that Mauricio Pochettino steered the side to a 4-1 win without Neymar, who is injured.