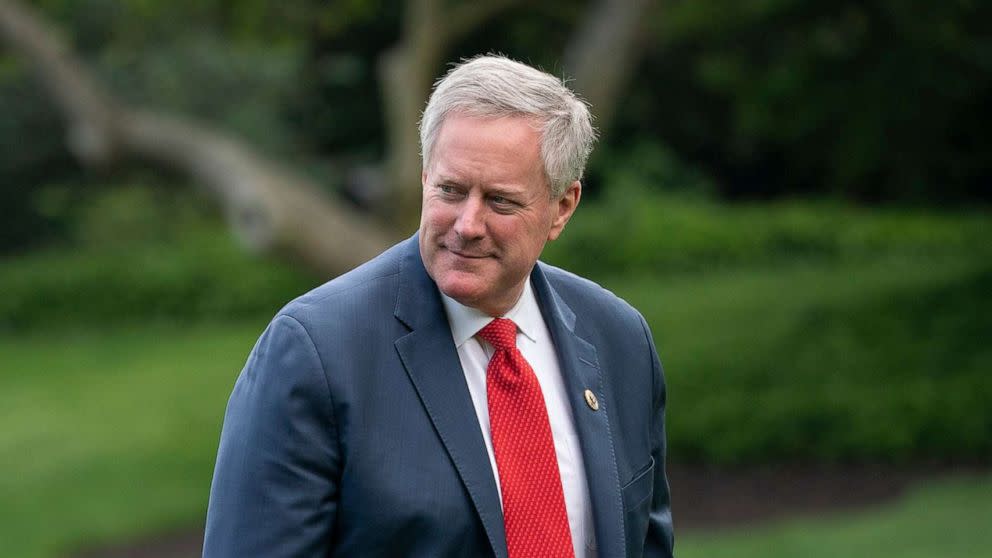 White House Chief of Staff Mark Meadows attempted to push back Sunday against speculation that the 25 million out-of-work Americans receiving expanded pandemic unemployment insurance could face gaps in the assistance they receive due to the delay in passing a new coronavirus relief package. He further characterized Republicans’ opposition to extending the $600 per week federal benefit as an incentive to encourage people to return to the workforce.

“The original unemployment benefit actually paid people to stay home, and actually a lot of people got more money staying at home than they were going back to work, and so the president was very clear, our Republican senators have been very clear, we’re not going to extend that provision,” Meadows said on ABC’s “This Week.”

The forthcoming Republican coronavirus relief package will set unemployment insurance at 70% of one’s pre-pandemic wages, Meadows explained. But with that bill delayed this past week by disagreements within the GOP caucus and Democratic opposition looming, the chief of staff was pressed by ABC News Chief Anchor George Stephanopoulos about whether those receiving assistance will face a pause in payments after the initial benefits expire at the end of July.

“Administrators have said that that’s going to be almost impossible to administer and people are going to face real gaps before they get money,” Stephanopoulos said.

Asked whether expiring federal unemployment benefits will be extended, WH Chief of Staff Mark Meadows says “The original benefits will not… We are going to be prepared, on Monday, to provide unemployment insurance extension that would be 70% of wages.” https://t.co/qxICVVlxra pic.twitter.com/cDY6VWjXNN

One workaround, as described by Meadows, could be for Congress to pass time-sensitive components of the package first, then negotiate the rest later — despite Democrats having already voiced opposition to a piecemeal process.

“Honestly, I see us being able to provide unemployment insurance, maybe a retention credit to keep people from being displaced or brought back into the workplace; helping with our schools,” Meadows said. “If we can do that, along with liability protection, perhaps we put that forward, get that passed and we can negotiate on the rest of the bill in the weeks to come.”

Meadows and Treasury Secretary Steven Mnuchin are serving as the Trump administration’s lead negotiators on the forthcoming coronavirus relief bill, which is expected to be unveiled early in the coming week. Mnuchin previewed details of the legislation for reporters Thursday, which includes a second round of direct payments to Americans, but continued discussion among the GOP caucus delayed the package through the weekend. The chief of staff said that the pair will again spend part of the day at the Capitol on Sunday working on the legislation.

With positive COVID-19 cases continuing to surge across much of the United States, President Donald Trump faces calls to slow down his push for schools to reopen this fall and issue a nationwide facemask mandate. After resisting appeals for months to issue more direct guidance on masks and to wear one himself, both Trump and White House officials have recently stepped up their messaging on the topic, with the president acknowledging “they have an impact,” at a briefing this week.

On Sunday, Meadows told Stephanopoulos that steps like facial covering mandates or the rollback of reopening plans — while potentially helpful — would not be the efforts that end the pandemic.

“It’s not masks. It’s not shutting down the economy,” Meadows said. “Hopefully it is American ingenuity that will allow for therapies and vaccines to ultimately conquer this.”

Meadows maintained that the administration’s attention is fixed on long-term solutions, saying that he was “hopeful” the administration may have “very good news on the therapeutic and vaccine front … in the next couple of days.”

Pressed on mail-in ballots and why Pres. Trump won’t clearly say he would accept the results of the election, WH Chief of Staff Mark Meadows tells @gstephanopoulos “that’s not the way that voter integrity process needs to run.” https://t.co/e7mkCDo6eC pic.twitter.com/PP1U9gAQtY

But across the country, states are preparing for the virus’ impact to last well into the fall. Amid the pandemic, over 30 either are expanding the ability of their residents to vote in November’s election by mail or promoting no-excuse absentee voting.

For that reason, in an interview with Fox News last week, Trump would not preemptively commit to accepting the ultimate result of his contest with former Vice President Joe Biden.

“The president continues to warn that (the election) is going to be rigged — that’s his word — by mail-in ballots, even though there’s no compelling evidence that mail in ballots are tied to widespread voter fraud,” Stephanopoulos said on “This Week” Sunday. “Why does the president keep questioning the election, and why won’t he say clearly, as every president has done before, that he’ll accept the results?”

“You talked earlier about ‘compelling evidence’ of any voter fraud as it relates to mail-in ballots, I would have to disagree with that,” Meadows said.

“We haven’t had widespread mail-in-ballots,” Meadows said, despite the fact that states such as Colorado, Oregon, Utah and Washington have successfully used the system prior to 2020.

“You know, the Democrats see this as their panacea of being able to put a ballot in every mailbox and hope for the best. Listen, that’s not the way that a voter integrity process needs to run, where you send a ballot to everybody,” he continued, conceding, “I’m not suggesting that there is widespread fraud. But there certainly is fraud.”

Stephanopoulos also challenged the chief of staff on warnings issued by the U.S. intelligence community this week of potential foreign interference in the election, including by Russia, and whether it was a topic of conversation between Trump and Russian President Vladimir Putin. Meadows did not answer the latter question, but pointed to the “hundreds of millions of dollars” invested in intelligence and election security and attempted to differentiate between attempts to impact the campaign and successful efforts.

“Now there’s a big difference between foreign interference in foreign influence,” he said. “They continue to try to influence, as everyone does across the globe, but in terms of actually affecting the vote total and interacting, I think we’re in a good place.”