Madrid. Barcelona striker Lionel Messi is not the only one to end his contract at the end of June 2021. Other important players would also be free by then, such as Sergio Ramos (Real Madrid), David Alaba (Bayern Munich), Sergio Kun Agüero (Manchester City) and Zlatan Ibrahimovic (Milan).

Their situation generates expectation and could enliven the January market, just opened in European football. Either they renew with their current clubs or they are transferred before February 1. If not, their teams risk watching them leave without receiving any amount.

The next few weeks will be decisive for Barça and for the future of the six-time Ballon d’Or winner, who already showed a few months ago his desire to change of scene and to whom FIFA regulations already grant legal authorization to negotiate from this January 1 with any club a new contract without having to pay for the transfer as of July 1.

Despite the possibility of taking over their services since July without payment of a clause, there are few clubs with the economic muscle to face the Argentine’s salary.

So far, the most serious candidate is Paris Saint-Germain, although Manchester City also has economic arguments to attract the Argentine, who receives a gross monthly salary of 8.3 million euros (10.09 million dollars) according to L ‘Equip. 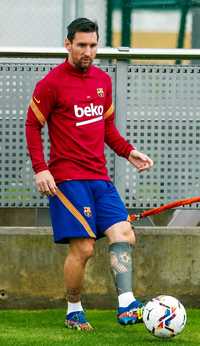 Messi is the highest paid footballer on the planet, well ahead of Cristiano Ronaldo at Juventus ($ 5.4 million), and PSG stars Neymar ($ 3.6 million) and Kylian Mbappé ($ 2.4 million).

After the case of the Argentine star, that of Real Madrid captain Sergio Ramos also gains notoriety. There are talks to renew and the defender would like to continue, but the team has a reduced economic margin. His teammate Lucas Vázquez is in the same situation.

The merengue team dreams of bringing into their ranks the Austrian David Alaba, who in June would end his contract with Bayern Munich.

The Bavarian giant tries to retain his side, but several big names in Europe are interested in him. In addition to Real Madrid, PSG, Liverpool and Chelsea have sounded.

In England, Argentine Sergio Agüero would come to the end of his relationship with Manchester City, but the attacker could continue at Josep Guardiola’s club.

In Italy, the charismatic Zlatan Ibrahimovic could extend his contract with Milan, a club in which the Swede is for now the star of the Rossonera season.

Frenchman Franck Ribery would finish in June with Fiorentina, who are happy with him despite his injuries; however, he has hinted that he could go to the US MLS.